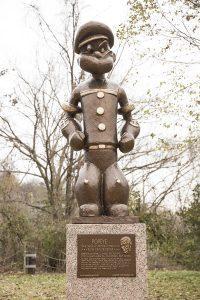 Popeye the Sailor Man has been in the news recently for faithfully standing his watch. For 40 years this June, a 900-pound statue of Popeye has stood overlooking the Mississippi River at Segar Memorial Park next to the Chester Welcome Center. Chester, Illinois, is the birthplace of Popeye’s creator, Elizie Crisler Segar, and the good people of the town are exceedingly proud of their hometown boys – the artist and his more famous creation.  When a new idea was proposed as a whimsical way of drawing more tourists into the town, the “Popeye & Friends Character Trail” quickly captured the imagination of Chester’s citizens. Donations and sponsorships received every year have made it a reality. The Popeye Character Trail is a trail in progress consisting of granite statues of the Popeye characters placed in various areas throughout Chester. Since 2006 when Wimpy became the first of Popeye’s “Friends” to be erected, the Trail has grown and now includes 12 statues.  This year in September at the Annual Popeye Picnic extravaganza, King Blozo will join the cast of characters as the 13th statue. Read more about it in Chester’s hometown newspaper here: 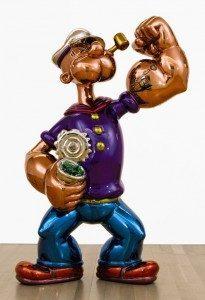 The Los Angeles Times travel section featured an article this week with an interesting slant on Las Vegas – focusing a look at the public art there. In addition to a new work at the Venetian which incorporates 32 miles of satin ribbon and a hot air balloon and animated carousel made of 110,000 flowers at the Wynn Las Vegas, a famous Sailor Man stands guard under the watchful eye of a security guard a short distance away.  The resort paid $28,165,000 for “Popeye” sculpted by Jeff Koons at a Sotheby’s auction of fine art. If you can’t make it to Las Vegas in person to admire Popeye and the other wonderful art to be enjoyed, at least check out the story here: