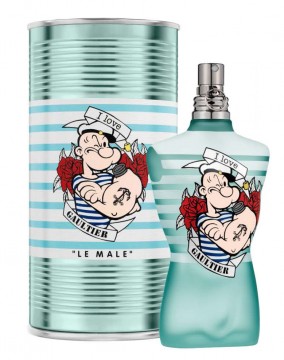 One of the best kept-secrets in the fragrance industry was revealed on March 2 – the launch of the unique Jean Paul Gaultier Popeye and Betty Boop Eaux Fraîches fragrances for Summer 2016.  Developed under license from King Features, Jean Paul Gaultier created the original character-based labeling designs for the iconic sailor’s fragrance “Le Mâle” (Popeye) with classic tin can packaging.

Jean Paul Gaultier posted digital teasers during Paris Fashion Week on social media (#PopeyeLovesJPG and #BettyLovesJPG ) as well as on strategically placed posters; and the Gaultier team revealed more at an exclusive boat party on the Seine.  Accompanied by extensive point-of-purchase branding and promotion, including unique premiums and GWPs, the fragrances will be available in France exclusively at the Nocibé and Marionnaud perfumery chains from March 15 and then online and in top department stores and perfumeries worldwide from April-May onward.

King Features is the exclusive worldwide licensing agent for Betty Boop and works closely with Fleischer Studios. The New York City-based unit of Hearst is owner of the Popeye property.

The Gaultier team describes the collaboration with Popeye & Betty Boop as “a match made in heaven” between the sailor boy and the pin-up girl. Mais bien sûr!

The deal was brokered by King’s agent in France, Biplano.

Since establishing his fashion label in 1976, Jean Paul Gaultier has been challenging genres and prejudices. His exceptional expertise is evident in his catwalk shows that bring together the most exclusive skills, offering non-conformist fashion and an open-minded vision of society. The “enfant terrible” of fashion draws inspiration from many sources, and is as likely to be inspired by the sidewalk as he is by his personal history. His spectacular catwalk shows parade now legendary garments such as the corset, the sailor striped jersey and «the man skirt». Taking trends from street level to the catwalk: this sums up the attitude of the iconoclast putting pop culture into his shows to boost its cachet. And what better way of achieving this fashion reversal than to (re)interpret the people around him? Whether she is unknown or well-recognised, Jean Paul Gaultier’s vision of the Parisian woman is manifold. He has dedicated more than a dozen collections to her: “The Parisian woman is the woman I know best and yet someone I might not even have met!”

King Features Syndicate, a member of Hearst Entertainment and Syndication Group, is the world’s premier distributor of comics, columns, puzzles and games to print and digital outlets worldwide. One of the largest and most experienced organizations in merchandise licensing and entertainment, King represents some of the most recognizable global brands, including “Popeye,” “Olive Oyl,” “Betty Boop,”  “Flash Gordon,” “The Phantom” “Mandrake the Magician” and “Hägar the Horrible.” For more information, please visit www.kingfeatures.licensing.com

Biplano was founded in 1990 and has now premises in Barcelona, Madrid, Lisboa, Paris and Shenzhen. Biplano is a leader company in the licensing world and promotional marketing in Southern Europe and performs in 6 different categories of licenses to cover the specific needs of each product representing the best licensors in the world, such as King Features, Rovio, WWE, Fremantle, Chupa Chups, Jim Henson, Animaccord and M.G.A., among others.