It’s rare that the reporter becomes the story but, as we celebrate the 85th anniversary of Popeye’s first appearance on Jan. 17, 1929,  that’s exactly what has happened.

A newspaper arts & entertainment editor in California who was writing a story about the Sailor Man, his creator, Elzie Crisler Segar, and the history of the character contacted us here at King Features for assistance with background information, interviews and artwork. The result? A fantastic cover story on our favorite mariner!

Now meet the man behind the story: Michael Aushenker is  Arts & Entertainment Editor for The Argonaut, a weekly newspaper serving West Los Angeles, including Venice, Marina del Rey, Playa del Rey, Del Rey, Playa Vista, Mar Vista, Westchester and Santa Monica, Calif. Santa Monica is, of course, where Segar lived most of his life and is buried.  In fact, when Michael was doing research for the story, he went to visit Segar’s grave over the weekend of Dec. 8, which was Segar’s birthday. Talk about coincidences. But perhaps not so strange. You see, Michael is absolutely passionate about Popeye  – which comes through as he tells Popeye’s story.

Michael moonlights as a humor comics cartoonist (CartoonFlophouse.com), is a member of the Burbank-based CAPS (Comic Art Professional Society, which MAD magazine’s Sergio Aragones founded in 1977). When we asked him how he became interested in the subject, he told us, “I owe my interest in cartooning to Mr. Segar’s legacy and those vintage Fleischer Bros. cartoons I was weaned on. Absolutely true, my favorite comic strip and cartoons of all time!” We certainly won’t argue with that!

Kudos to Michael and his crack editorial and production team at The Argonaut for doing such a beautiful job. Here’s how the newspapers looked on the stand. 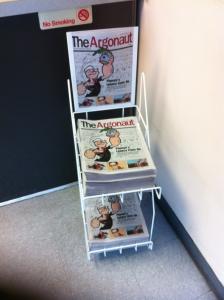