“Ever since I was a kid, the two cartoonists who have had the biggest influence on me have been Carl Barks and E.C. Segar, so getting a chance to write POPEYE is quite a thrill,” said Langridge. “I’m especially pleased that IDW have decided to go with a Segar-flavored interpretation. As much as I like some of the later versions of the character, for me, it’s those early strips where the magic really happened. Just as well Segar drew everybody with big feet, because Bruce and I have some enormous shoes to fill!” 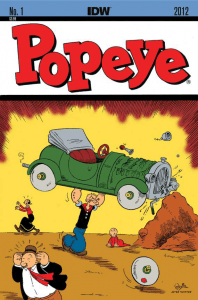