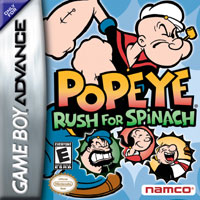 Popeye the Sailor Man, a multi-media sensation who has starred in his own cartoons, movie and 3-D TV special, now has his eyes set on winning the hearts of gamers everywhere. Global video games publisher, Namco Hometek Inc. has teamed up with King Features Syndicate and created a new interactive game featuring the world-famous, spinach-guzzling sailor and other popular characters from the Popeye universe.

Launched in April and currently available at retail stores nationwide, Popeye: Rush For Spinach is rated “E” for Everyone and sells for $19.99.

In this colorful action/adventure game, Popeye and his friends are competing in the ultimate race. Game players can choose their favorite character – Olive Oyl, Bluto, Wimpy or even Popeye himself – to compete in the race for the most spinach. Players can defeat the opposition and cross the finish line on foot, by boat or car, and even on a skateboard or pogo stick! Winning the race not only requires speed, but also skill.

The game, which allows players to complete against themselves or a friend or work together as a team, features four playable characters, 13 locomotion types, five game modes and seven levels. For the skilled player, the game also includes four unlockable areas and power ups.

For more information about Namco and its products log onto https://www.bandainamcoent.com/