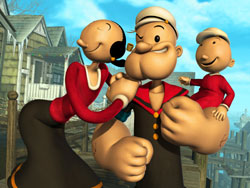 After more than 70 years of serving as a dedicated parent, POPEYE THE SAILOR MAN will officially finalize the adoption of his beloved SWEE’PEA in a special ceremony hosted by the National Council For Adoption in New York City on November 21. Celebrating POPEYE’s role as a model father for baby SWEE’PEA and as an inspiration for adoptive parents everywhere, official recognition of POPEYE as SWEE’PEA’s legal parent will be the centerpiece of its annual ‘Kids at Heart’ event commemorating National Adoption Month.

SWEE’PEA has accompanied POPEYE on most of his adventures, but many fans have long been uncertain of just how the two came together. Although he lives with POPEYE, SWEE’PEA is not the child of POPEYE and his longtime girlfriend, OLIVE OYL.

Baby SWEE’PEA arrived on POPEYE’s doorstep July 28, 1933 when SWEE’PEA’s mother left him there, knowing the trustworthy sailor would protect him. POPEYE’s home immediately became a safe haven for SWEE’PEA and the two bonded. POPEYE refers to SWEE’PEA as his “adoptid infik” but had never been granted official custody – until now!

The adoption will be officiated by Judge Greg Mathis of TV’s “Judge Mathis” show. Also attending the celebration will be actress Dana Delany and hundreds of local children and their new adoptive parents.

In addition to the actual event, Popeye’s adoption of Swee’pea also can be seen that same day in the nationally syndicated POPEYE THE SAILOR MAN newspaper comic strip from King Features Syndicate. In the strip, POPEYE is seen alongside a portrait of OLIVE OYL. He is polishing his shoes, ironing his sailor suit and coiffing his hair in preparation for the “most special day of me life.” He’s nearly late as he races up a flight of stairs and through the doors of a grand building. Inside, the surprise twist for readers is not OLIVE standing at an altar, but rather a carnival-like scene decorated with balloons, streamers and populated by happy children and parents. A banner reads “National Council For Adoption ‘Kids at Heart’ Festival” and another sign says, “Celebrate Adoption with Special Guests Popeye and Swee’ pea.” When POPEYE leaves the building, he emotionally walks into the sunset with SWEE’PEA on his shoulder. The final panel says, “Adoption is a beautiful thing” and “November is National Adoption Month.”

A week prior to the adoption event, in the November 14th nationally syndicated POPEYE comic page, POPEYE cartoonist Hy Eisman will insert a flashback to the original POPEYE strip in which SWEE’PEA first appeared. That vintage comic strip shows POPEYE opening a mysterious box and exclaiming “Whoopee, I always wanted a baby!” POPEYE names the baby SWEE’PEA and christens him in spinach to make it official.

Background on the National Council For Adoption (NCFA)

NCFA has been a champion of adoption since its founding in 1980. Whether as an advocate for state laws that promote sound adoption policy, a resource for federal officials and policymakers about appropriate federal adoption initiatives and reform, a diplomat for sound international adoption policy, or a source of adoption facts and education, NCFA is devoted to serving the best interests of children through adoption. To learn more about the ways in which NCFA works to promote adoption, please visit www.adoptioncouncil.org