Nextel Cup Series Drivers Jeremy Mayfield and Kasey Kahne to Drive the No. 9 and No. 19 Dodge Dealers/UAW/Popeye Dodges in Nationally Televised Race in July! 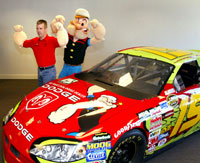 Well, blow me down! Race fans everywhere will share in the celebration of Popeye The Sailor Man, one of the most recognizable icons of the 20th century, as he celebrates his 75th birthday in 2004. During the NASCAR NEXTEL Cup night race at Daytona International Speedway in July, Evernham Motorsports drivers Jeremy Mayfield and Kasey Kahne will drive special-edition Dodge Dealers/UAW/Popeye Dodges featuring imagery culled from assorted Popeye comic strips.

Popeye, his best girl Olive Oyl, his adopted baby Swee’pea and even his mortal foe Bluto will be featured on a series of race cars designed by Action Performance Companies Inc., the leader in licensed motorsports merchandise. Popeye also will set sail with race appearances in the World of Outlaws and the National Hot Rod Association.

In addition, Action Performance will also produce die-cast replicas of every Popeye 75th Anniversary-themed race car. The die-cast will be available in a variety of collector scales through Action’s standard distribution channels, including the 18-member ARC distributor network and the RCCA collector’s club (To locate an ARC distributor, please call 1-800-411-8404. For more information about RCCA, call 1-800-952-0708 or visit www.goracing.com).

This promotion is part of King Features Syndicate’s huge initiative of launching its most aggressive and wide-reaching licensing, marketing and promotional program to date with a yearlong series of high-profile events designed to bolster the popularity of the world’s most famous sailor man. Headlining the campaign will be “Popeye’s Voyage: The Quest for Pappy,” an all-new Popeye 3-D CGI (computer-generated imagery) animated special that will air in primetime on FOX and be released in a DVD premiere during the holiday 2004 season.

Action Performance Companies Inc. (NYSE: ATN) is the leader in the design, promotion, marketing and distribution of licensed motorsports merchandise. The Company’s products include a broad range of motorsports-related die-cast replica collectibles, apparel, souvenirs and other sports-inspired memorabilia. Action Performance markets and distributes products through a variety of channels including the Action Racing Collectables network of wholesale distributors, the Racing Collectables Club of America, QVC, goracing.com, trackside at racing events, direct corporate promotions, mass retail and department stores, specialty dealers and select online retailers. For more information about Action Performance and its many subsidiaries, please visit the company’s corporate Web site at www.action-performance.com.

For more information about this event, please click on the links below: www.action-performance.com