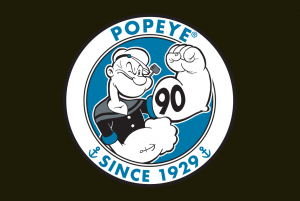 Get ready, Popeye’s big birthday is coming!!  Today a full slate of new content and merchandise for the 90th Anniversary celebration was announced. And with exciting product

lines, events, and content set to help celebrate the iconic sailor man, 2019 is primed to be Popeye’s biggest year ever.  Here are just a few highlights for fans to look forward to: 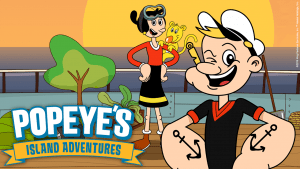 As announced in May, King Features and entertainment studio WildBrain will produce the first original Popeye content in over 10 Years!  These all-new shorts in the popular squash and stretch animation style will debut this Fall.

audience across the platform. The digital studio recently unveiled new compilations of cartoon favorites including Classic Popeye, Popeye and Son, and The Continuing Adventures of Popeye.

In Popeye’s early days, E.C. Segar often shared artwork drawn by fans at the end of the Thimble Theater comic strip. He called this “Popeye’s Cartoon Club,” and it gave ordinary readers a chance to share the page with Popeye. In honor of Popeye’s 90th birthday, King Features is bringing Popeye’s Cartoon Club back with a special twist. This time, Popeye is inviting cartoonists from around the world to contribute their own comic strip featuring the spinach-loving sailor and his friends; these new original strips will be published weekly throughout 2019.

Popeye Anniversary Products Around the Globe

Check back for more updates soon!